Thirty-five years ago this week,
I brought Oscar home to live with my husband and me.﻿
Who is Oscar?
I'll start with what Oscar is not:
He's not a dog,
not a cat,
nor a ferret, gerbil, or horse.
Also not a canary, parakeet, or talkative parrot.
And definitely not a child or a boarder.

Here's a recent portrait of Oscar: 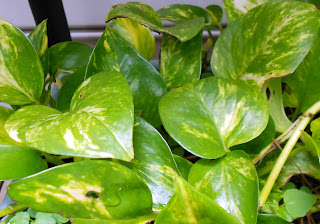 Oscar is our golden pothos plant who turns 35 years old this week.
He's considerably larger than when I bought him for one dollar
at a Woolco department store in Norfolk, Virginia--
a purchase that was made during a bad storm
that knocked the lights out in the store
and collapsed a large portion of the old Harrison Fishing Pier near my apartment.

The golden pothos is a popular houseplant,
although I banished Oscar to the dark garage in winter
and the outdoor deck in summer a long time ago.
He doesn't mind the dark, the sun, or the benign neglect.

I think lots of people have, or have had, an Oscar of their own.
And as I see it, there are two kinds of people in this world:
those who cut the vines off
before the green tendrils have a chance to make a run for it across table tops and shelves,
and those who encourage the wandering,
gleefully wrapping the long runners around a room like a bad comb-over.
I won't name names here, but you know who you are.

I was looking for information about the golden pothos
and found it has been scientifically proven to clean the air in a home.
I think the more one has, the cleaner the air will be.
I may need to bring home a brother and a sister for Oscar one of these days.

Another thing I discovered on Wikipedia.org
is that the golden pothos has a number of different names:
centipede tonga vine, hunter's robe, money plant, and taro vine, are a few;
but it's not a philodendron. 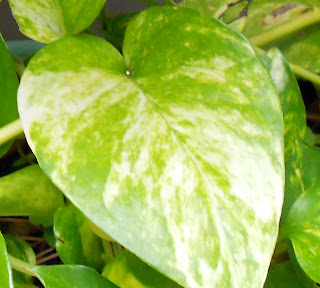 Another of its names is devil's ivy, and I seem to recall once calling it that myself.
But the golden pothos is far from being the devil's own.
I have another plant that lurks around the foundation of my home,
looking for a chance to meddle and bedevil.
It's not called devil's ivy, but it should be.
I'll introduce that plant in tomorrow's blog.
<>

Posted by Maggie English at 8:00 AM